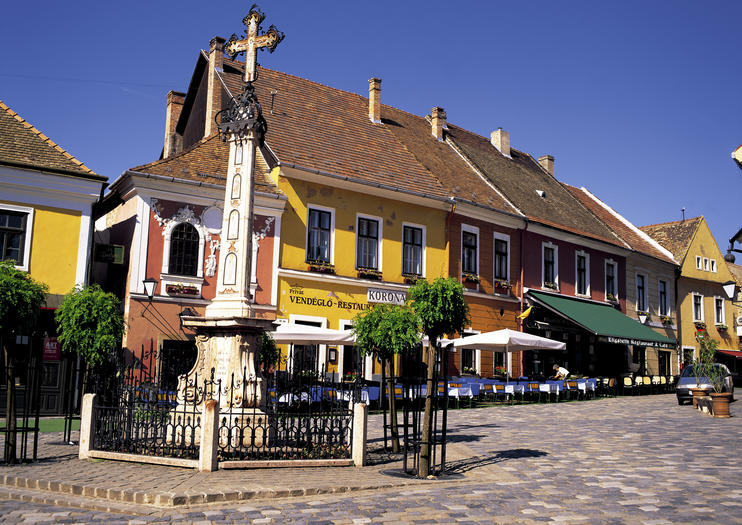 North from the capital you will find the lovely village of Szentendre and the ethnographic museum of the real village life of the Hungarians.

Szentendre with its colourful houses, narrow alleys, and 24 museums, is the most frequently visited tourist centre along the Danube. This Mediterranean-like town is the home of Serbs who fled from the Turks and settled here in the 14th-17th centuries. Seven church towers rise high in the sky. Four of them belong to the Orthodox Church. Icons, works of gold and silversmiths and other treasures are found in the Serb Orthodox Church Museum. The 13th-14th century Roman Catholic Parish Church stands on the Castle Hill, a sun-dial on its wall tells the time.

For the tourist who is looking for nostalgia, there are: shops, restaurants, trade signs, the ancient buildings of the Main Square, and the house ornaments. The Kovács Margit Museum is a tiny jewel-box. Its charming ceramic figures are visions of goodness, beauty and humanity. The works of the most talented artistic family of 19th century Hungary, Károly Ferenczy, his wife and his children, can be seen in the Ferenczy Museum. The Gallery of Szentendre in the former 18th century Serb merchant house and the Gallery of the Artists’ Colony exhibit the works of the town’s contemporary artists. The Marzipan Museum offers fantasies made of marzipan, while the Dobos Confectionery Museum introduces visitors to the real Dobos Cake.

The ethnography of Pest County is shown in the House of Folk Art. Antiquities from the Roman town of Ulcisia Castra (1st to 4th centuries) can be seen in the Museum of Roman Stonework Remains. The open-air Ethnographic Museum (or Skanzen) has the largest ethnographic collection in Hungary with 340 buildings in 10 sections. Folk monuments worth preserving are transported here from all over the country. Demonstrations of folk handicrafts are held at the weekends and “notable days” of Hungarian folk culture are celebrated.