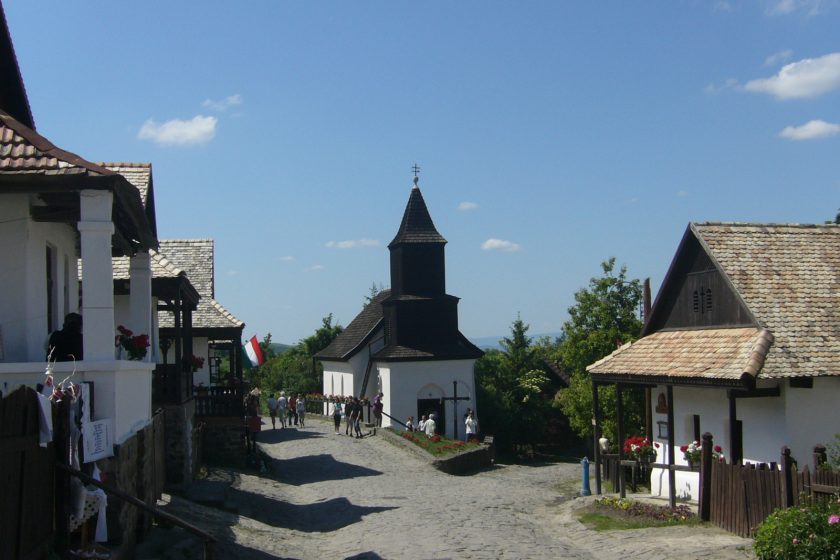 Located in the northern part of Hungary, in Nógrád county, in the Cserhát Mountains, about 100 km northeast of Budapest, the small picturesque village of Hollókő is one of Hungary’s most popular attractions.

Hollókő was developed mainly during the 17th and 18th centuries, its traditional rural houses preserve the cultural heritage of local Palóc families.

The village conservation area consists of 58 houses and a small church. The village is a representative of single street village type characteristics of the region.

In the middle of the village, stands a small church with a wooden steeple and shingle roof, which was built in 1889.

Some of the traditional houses were transformed into museum: Post Museum, Weaving House, Doll Museum and Hollókő Village Museum.

The Castle of Hollókő was built in the 13th century on the hill above the village. There is a small museum within the castle. Old village of Hollókő and its surroundings were added to UNESCO World Heritage List in 1987.

The most popular festival of the village is the Easter Festival of Hollókő (Hollókői Húsvéti Fesztivál) when local women are dressed according to the folk tradition of Hollókő (in their hand-woven, embroidered folk costumes) and celebrate the arrival of spring.

Besides traditional folklore programs, visitors can learn how to create the famous Hungarian painted Easter eggs.

Hollókő Castle Tournament (Hollókői Várjátékok) is organized in mid-August; it is a day of medieval tournaments when combats with historic weapons, historic music,  dances,  puppet shows  and other folklore events are displayed.

Palóc Folklore Festival (Palóc Szőttes Fesztivál) is organized on the last weekend of July when local and international folk groups perform an open-air festival for the audience.

Vintage Parade of Hollókő is held on the second Sunday of October when villagers walk along the main street in traditional folk clothes, demonstrating that grape harvest is over.

How to reach Hollókő

There is no direct train connection to Hollókő. From Budapest, trains go to Pásztó (southeast of Hollókő) or Szécsény (north of Hollókő) and there are 8-10 buses daily from Szécsény, and 4-5 buses per day from Pásztó to Hollókő.

There is one direct bus to Hollókő departing daily from Budapest’s central bus station at 15:15. On weekdays between 01 May and 01 September, an additional bus goes to Hollókő at 8:30AM. The journey takes about 2 hours.

If you are driving from Budapest, take M3 Motorway to Hatvan, then M21 main road to Pásztó, finally take the local road from Pásztó to Hollókő.